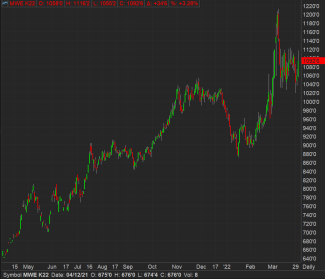 Is The Wheat Rally Over?

All three wheat futures in March had a wild ride...

I've been getting the question lately.....have we seen the highs in wheat?

Wheat experienced a "buy the rumor and sell the fact" type of scenario.

A de-escalation of the Russia/Ukraine conflict could bring some relief for food inflation, however, it will take a long time for the markets to move back down to levels seen before the conflict.

There could be an initial reaction down to positive conflict news, but there are still other factors like crop damage that could help support.

Significant uncertainty on the production outlook from China remains and that could be bullish longer term.

Overall, the report was supportive for wheat prices.

I'm watching closely to see what the soy complex does in coming weeks.

The rally canola in March wasn't supported by soybean oil or soybeans, which actually are lower for the month.

I still haven't been putting in any significant new crop hedges on the November futures.

Clients that are concerned about a decline short term for canola they still have in the bin and need to move before next crop I have been considering July put options.

July puts expire on June 24th, which would give you about three months of protection.

Fears of a fertilizer shortages plus record high pricing could be factors to reduce usage and lower corn production for key producers.

Corn futures have been fairly sideways this month and seemed to be waiting for more bullish news.

The USDA Hogs and Pigs report was showed less demand for corn than expected, which is one bearish factor to watch.

A positive factor could be the U.S. is considering temporarily removing restrictions on summer sales of ethanol as a way to lower fuel costs for U.S. consumers.

There are restrictions on E-15 during the summer and if lifted could boost ethanol production and support better demand for corn.

U.S. planted acres came in at 89.49 million, which was lower than the 92 million expected.

This is now the fourth consecutive year the March prospective planting report came in below expectations.

Stocks came in lower than estimates at 7.85 billion bushels.

The Canadian Dollar rallied to a five month high this month reaching $80.33 cents on the September futures.

Commodities rallying and strength in crude oil prices are playing a supporting role, but the Bank of Canada’s hawkish messaging has been the star of the sustained rally.

Inflation in Canada this month climbed to a multi-decade high, which has led to a more hawkish stance from the Bank of Canada.

Investors are betting the central bank will begin hiking its key interest rate in half-percentage-point increments, with the first of the rarely used upsized moves possibly coming as soon as next month.

If there were a time this year when we see a pullback, it might be after the budget because we could see more spending than expected.

The Canada Dollar could gain a few more cents on the back of elevated commodities prices and greater growth compared to global currencies outside of North America.

However, one factor to watch is how Canadian household debt continues to put a strain on the economy.

The cattle market seems to have the supply fundamentals to continue in a short-term uptrend, as beef production tightens into the second quarter.

Demand is still somewhat questionable as higher beef cuts will compete with a tightening consumer budget after taking into account the surge higher in energy and food prices.

This leaves less disposable income and may eventually be seen as a negative force.

For now, beef prices have pushed up to the highest level since February 17th and this might help cash markets turn higher into spring.