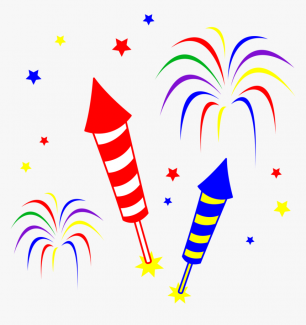 Last month I wrote how weather is going to be driving the grain markets for the next while. Click here to read it.

That is definitely the case for Minneapolis wheat reaching new contract highs this week.

However, there has been some recent technical selling that may be leaving traders wondering if the top could be in....for now.

I've been keeping in mind the severely dry weather for Spring Wheat growing areas in the U.S. and Prairies recently.

The weather is a bullish factor, but I let the actual price and technicals dictate to me the trends.

Short term we have seen some selling possibly from profit being taken on Minne/Kansas or Minne/Chicago spreads.

This was a big report week with StatsCan yesterday and the USDA today.

I'm going to start off with a review of wheat and discuss what the reports said for the other respective grains below.

Canadian farmers reported planting 23.4 million acres of wheat in 2021, down 6.5% from a year earlier.

Farmers in Manitoba reported that total wheat area was down 8.7% to 2.9 million acres.

All wheat acres came in above trade estimates attributed to strong winter plantings.

Spring wheat came in only slightly above and durum fell short.

One thing to note is Spring wheat plantings are seen down from March and last year.

Overall, it was a bullish report. 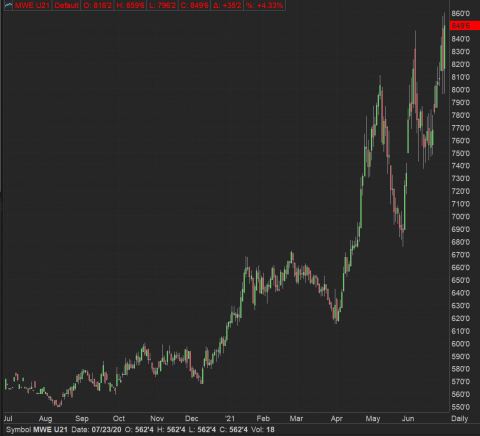 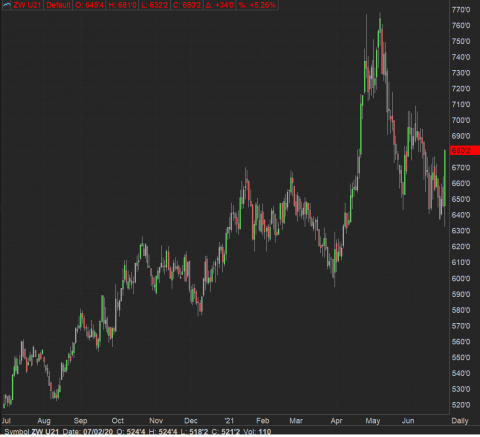 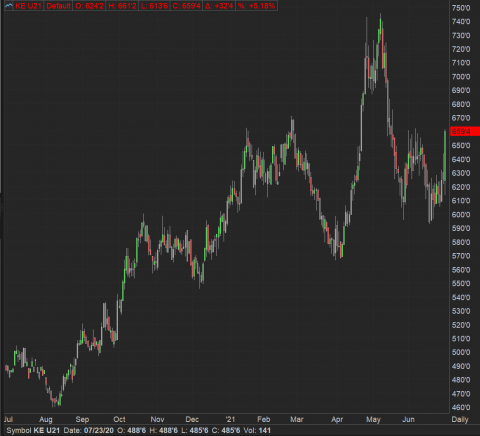 From a technical perspective, canola has broken through resistance around $760/t.

In other words, I want to see $760/t hold or that could confirm the futures might head lower.

If the heat throughout the Prairies does damage the crop, the continued high oilseed demand and short supply could support a further uptrend of canola prices.

Soybean oil has bounced off the lows recently helping to support a move higher in canola.

Saskatchewan farmers reported planting 12.1 million acres of canola, up 6.9% from a year earlier.

Farmers in Manitoba reported that canola area was up 1.0% to 3.4 million acres. 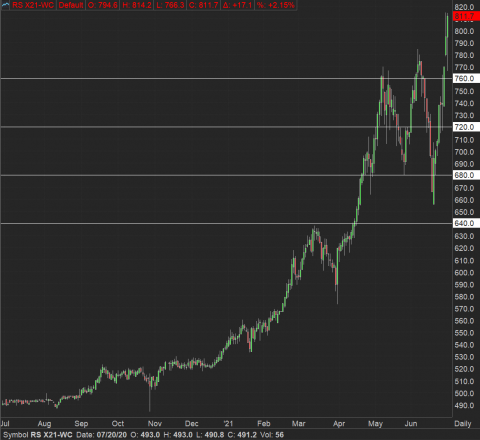 Corn futures were down almost $1/bu this month before the USDA report today.

It will not take much in the way of a weather scare to spark funds from building some weather premium and buying even more.

For the week ending June 27th, 90% of the state of South Dakota is rated short or very short of top soil moisture.

This is a big concern as the forecast for the next two weeks is very dry for the region and temperatures are expected to be above normal.

The 6-10 day forecast models show above normal temperatures for the northern half of the Midwest and below normal for the deep South.

One cause for the decline before today is expected rainfall in Iowa, Illinois and Indiana that could improve yields.

Cold weather in Brazil could do some damage to the unharvested corn crop. 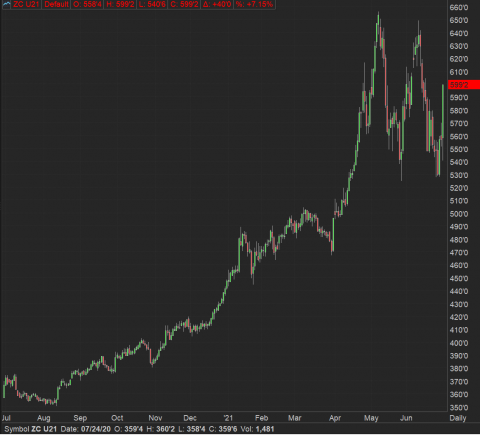 There is no room on the balance sheet for subpar yield so the report was quite bullish.

The trend is now up and looking like $15.60/bu on the August futures could be in sight if funds keep buying. 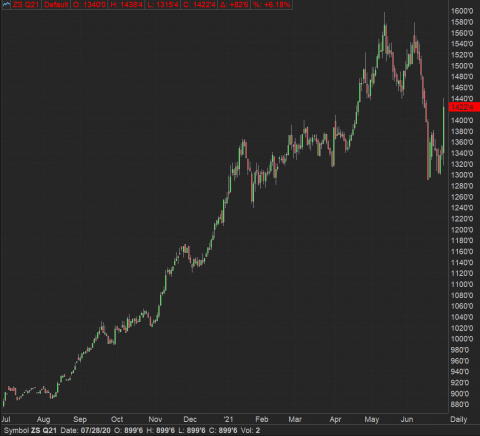 At the beginning of this month the Canadian Dollar broke lower from its sideways trend around 83 cents on the September futures.

The main reason for the decline in the Canadian Dollar is the US Dollar significantly increasing from Federal Reserve comments.

They were discussing inflation, the possibility of removing monetary stimulus and rates possibly increasing in 2023.

Typically, when investors are concerned on the direction of the overall market they buy the 'safe haven' US Dollar.

Another factor that could influence the Canadian Dollar short term is news OPEC might be increasing their output.

Oil futures have still been increasing and are on the trajectory for $75/bbl +.

This positive direction could be in jeopardy short term and could cause the Canadian Dollar to not return back to the 83 cents range.

A break below 80 cents would be a negative technical development and a break above 83 cents could confirm more upside. 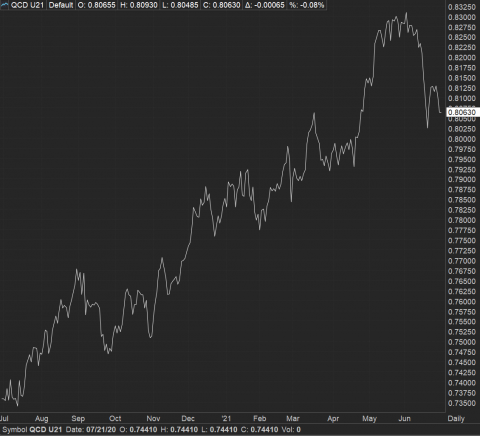 While the short-term trend in the beef market remains down, the futures market is reluctant to push August cattle much below the cash market.

If the market begins to break down due to the beef market collapse, the longer-term fundamentals look positive enough to expect support to hold.

August live cattle is in a short-term downtrend due to beef price weakness, but should be well supported on a continued corrective break.

Beef prices have pulled back to the lowest level since April 27, but remain at a record high for this time of the year.

Demand remains much stronger than normal and beef prices are up about 35% from 2019.

Feeder cattle seems that it is going to breakout higher or fall back.

I'm watching $162/cwt on the September contract as resistance.

If it goes above this level, there could be more upside and new contract highs.

On the August contract I have $128/cwt as resistance and $117/cwt as support. 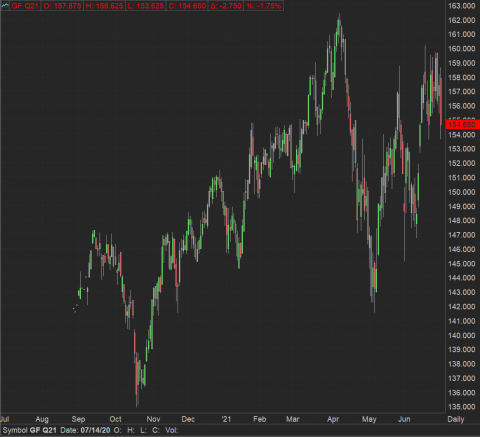 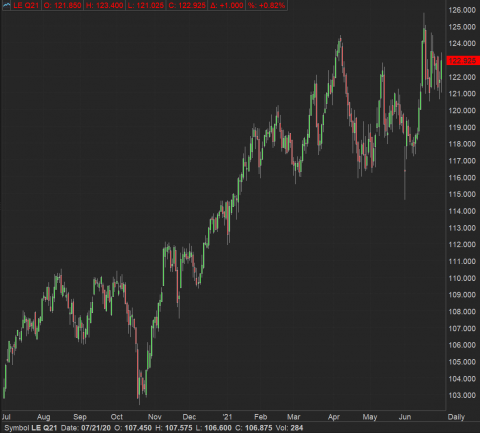