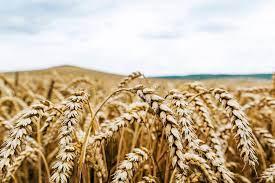 I mentioned last month that wheat futures could be starting to form a bottom and that a direction up or down could be shown soon.

With harvest underway it was looking like the trend could have been turning down.

Remember: The trend is your friend!

The technical action continues to improve, but the supply fundamentals are a bit negative unless food security issues remain strong.

Here are the numbers from today's USDA report... 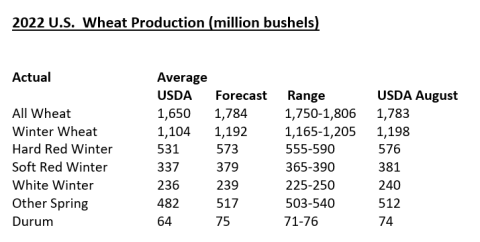 The report was supportive for the rally in wheat to continue with the crop coming in more than 7% below trade expectations.

This year's wheat harvest was basically even with a year ago instead of the projected 8% increases.

Consider this report a miss for the estimates.

For Minneapolis December wheat, a close above $9.90 turns the trend quite positive and leaves $10 and above in sight.

Today canola futures are closed for True and Reconciliation Day.

However, this month November canola is only up $22t.

I was watching for the November contract to reclaim above the $800 level before turning more bullish.

Producers I talk to across the Prairies don’t seem to have the yields they thought.

The last Statistics Canada report had production at 19 million tonnes, but it could even be below that.

I believe we could see canola increase in the wintertime if the fundamental picture in Canada turns bullish.

I'll be looking for strategies on the January and March contracts once the November expires next month.

One negative factor could be the possible bumper crop in Australia coming.

There are a lot of other factors that could influence canola and the grains in general over the short term.

The US Dollar is at 20-year highs, there is a potential global recession, the stock markets are down significantly etc.

I’ll be watching for an opportunity to participant in a rally in canola for canola, but I always have an exit strategy in case things don’t go as thought to manage the risk.

The December Canadian Dollar futures reached an intraday low of 0.72295 on Sept 28th.

You may have noticed that the overall financial (stock) markets have been falling.

The loonie has been more closely correlated with movement in stock markets in recent weeks rather than traditional drivers, such as the price of oil.

As well, the US Dollar is at 20 year highs and oil prices have declined recently.

Investors began another cycle of selling when as British Prime Minister Liz Truss said she would stick to her controversial plan to reignite economic growth.

Eyes were on the U.S. Fed officials who gave no indication the U.S. central bank would moderate its plans to aggressively raise interest rates to bring down high inflation.

While this may seem like 'gloom and doom' I think for producers it might be time to start thinking about some currency hedges.

I'm going to be reviewing in coming weeks various options strategies to protect producers if we see a rally in the CDN$ into next year.

The USDA report today has set the tone for corn.

It came out with corns stocks at 1.377 billion bushels vs the pre-report trade average estimate of 1.512.

This is a fairly large miss, which could keep the trend positive for now.

Corn futures have declined recently with harvest just ahead plus talk that export demand could drop off with the surging barge freight situation.

Slow ethanol demand and good weather for harvest have been negative factors too.

Keep in mind that if yield is adjusted down just 1.4% from the September USDA update, the market faces the second tights stocks/usage on record back to at least 1960.

Cattle futures are down to the lowest level in 18 months.

There is a technical trend called a sweeping reversal that has happened, which is a bullish development and may ease the selling pressures short term.

Traders see the sharp drop off in production for the fourth quarter as a potential supportive factors.

For now, slaughter is above last year's pace this week and beef prices have collapsed to the lowest level since March 30th, 2021.

In other words, traders have got out of their positions betting cattle was going to increase.

The trend is still down right now, but cattle markets are seeming to be deeply oversold and could see a bounce soon.