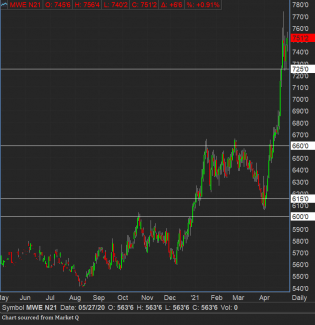 At High's on Wheat: Now What?

All three wheat markets have significantly increased this month.

On the July contract since April 1st, to the intraday highs on April 27th…

This might be the time to review options and futures strategies to protect some new crop wheat for your operation if you don't want to forward sell.

There has been follow through selling since this Tuesday’s key reversal showing that a top may be in place.

Wheat markets seems to be vulnerable to at least a corrective move lower.

Ideas that the higher prices will slow U.S. exports plus weakness in other grain markets could be factors.

Also, the weather outlook seems somewhat negative for prices as extended models continue to hold some rain in the forecast for the Dakotas.
Stats Canada released their acreage intention reports on April 27th and it said...

'Canadian farmers are anticipated to plant less wheat in 2021 compared with a year earlier, down 6.9% to 23.3 million acres.

The decrease is largely expected in spring wheat, which is anticipated to fall 8.8% to 16.3 million acres.

In Saskatchewan, farmers expect total wheat area to decrease 6.0% to 12.1 million acres as a result of lower spring wheat (-9.0%). 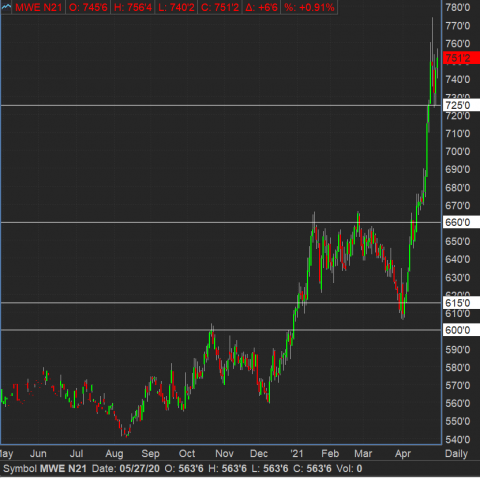 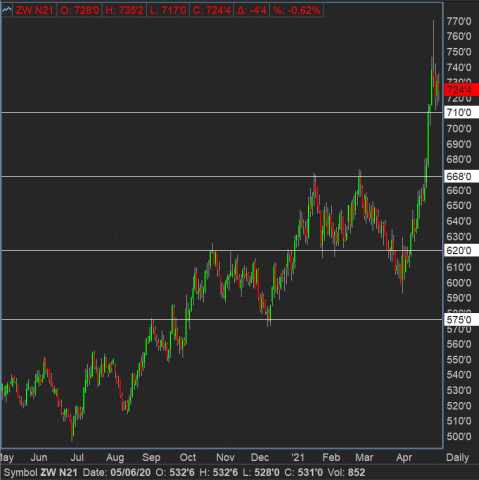 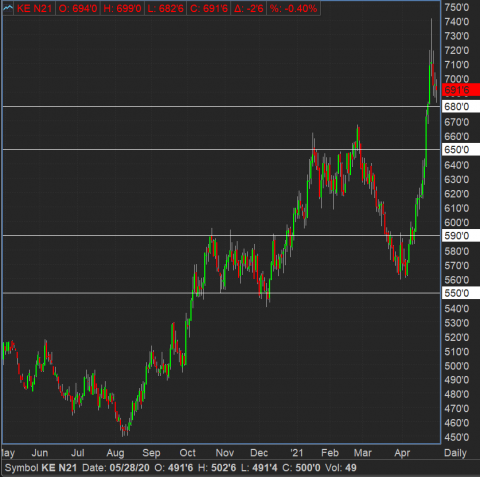 All factors are pointing to canola could stay supported at these levels.

However, one factor can change and canola could easily have a limit down ($30/t) day.

The rally in the Canadian Dollar (discussed below) might be a limiting factor for canola going forward, but right now it isn't having much effect

I've still been recommending if clients want to protect canola prices a Bear Put option spread might be the best way to go.

If you are unfamiliar with this strategy, it is a way for you to have a range of protection (say $690 to $640/t on the November futures) at a limited cost.

There is no risk to you if canola increase more and you have some downside protection.

Stats Can reported canola area is expected to increase for the first time since 2017, rising 3.6% to 21.5 million acres, the largest seeded area since 2018.

Farmers in Saskatchewan, the largest canola producing province, anticipate seeding 11.8 million acres of canola, up 4.4% from the same period one year earlier.

In Alberta, farmers expect seeded area of canola to increase 7.8% to 6.3 million acres. 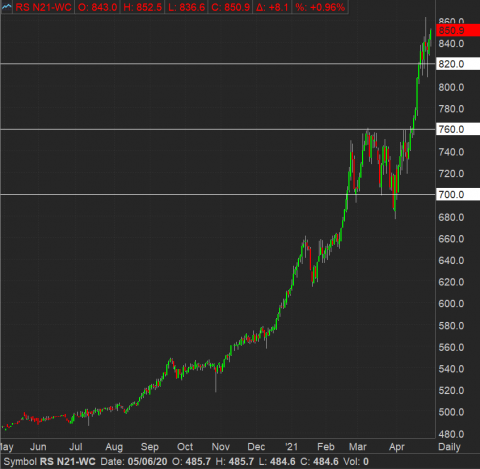 The soybean market seems to have enough short-term reasons to suspect some increased selling pressure.

The technical setup looks bearish for soybeans with stochastics recently crossing over from overbought levels and the sharp drop in open interest helping confirm that a near term peak was put in place Tuesday.

However, we could see a significant correction and still be in an uptrend.

A retracement back to $14.40/bu support, which is a $1/bu move lower from current levels, could easily happen.

There are expectations that actual U.S. planted area will turn out larger than the March 31 USDA report indicated. 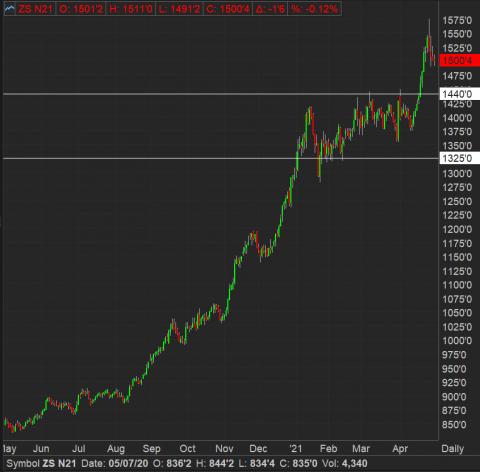 The Canadian Dollar has reached its highest level since 2018.

As I write this, the June futures are currently at 81.48 cents.

Economists say the Canadian dollar is at a ‘sweet-spot’ because it is at a point where it benefits consumers, but doesn’t hurt businesses too much.

The Bank of Canada said it plans to lower asset purchases by 25% and indicated it may hike interest rates as early as next year.

About $3 billion in currency futures were traded within a 30 minute period after the announcement, the most in six months.

The BOC Governor Tiff Macklem reiterated that the economy has been more resilient than expected, but noted that there are still parts that need improvement and will be targeting a more even recovery.

Canada would be the first major economy to indicate it will start scaling back emergency stimulus.

You may be thinking to yourself, why is the Canadian Dollar increasing on this news?

Our country doesn’t seem to be doing better than others.

Well, when a central bank is more optimistic than others, and targets a recovery ahead of others, countries notice this and think let’s put our money there ie buy their currency because it is safer than ours

Even before yesterday’s announcement the loonie outperformed all of its G10 currency peers in spite of the lockdown.

There have been other factors too like strong commodity prices and a weakening USD Dollar.

We may see the Canadian Dollar level off around this 82-85 cents. 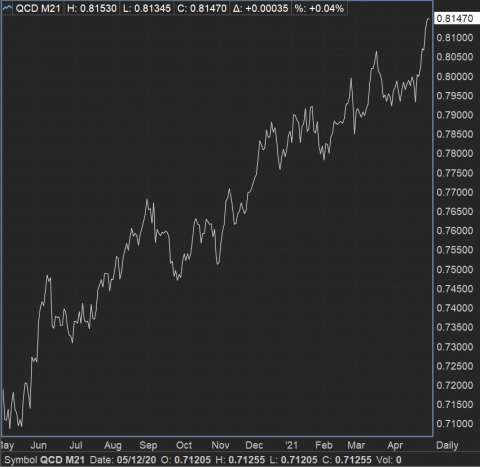 Feeder and live cattle futures have changed to be in a lower trend both falling $10/cwt approx this month.

Higher input costs could be seen as the fundamental reason there has been selling here as producers are resistant to paying higher feed costs.

Traders remain nervous with the short-term incentive for feedlots to sell cattle sooner rather than later due to higher price for corn.

It seems that the futures are probing for a low, but haven't found it yet.

The beef price rally continues to drive packer profit margins, but packers do not see the need to bid up cattle as sellers are active.

Recent weight data did not suggest that producers are overly current with marketings, so the selling could continue over the near term.

The trend is your friend and with cattle right now that trend is lower. 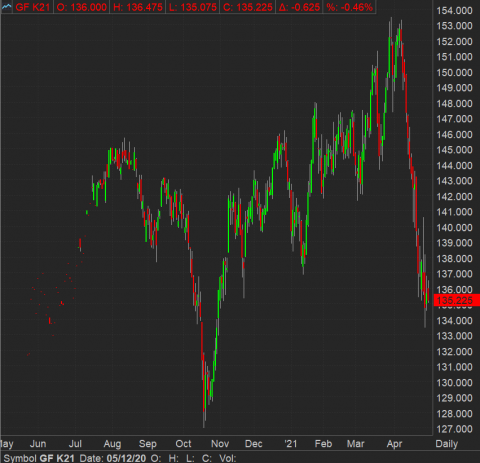 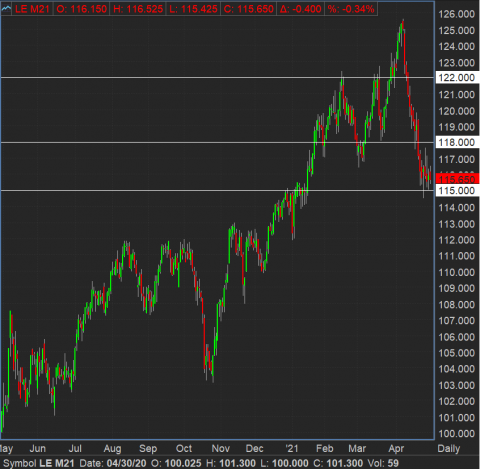