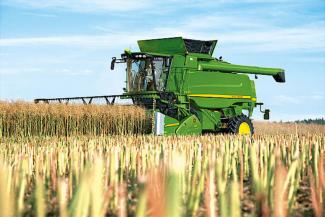 Last month I reviewed my thoughts on canola going back to $1000t again (click here).

November canola traded between $795t and $870t in August.

Now that harvest is coming farms have been asking me if we could see some pressure on the futures.

Talking with the 100+ farms I work with over recent weeks it seems that the canola crop varies quite a bit.

Earlier this month there was sharp drop in palm oil and weakness in the soy markets.

Crude oil was having some effect too with a lower trend recently.

However, some unexpected dryness in the U.S. has sparked the soy markets and have lifted canola as well.

A break below $780t could lead to $700t if other markets forces remain bearish.

I have resistance for the November contract at $870t approximately.

How much are you sold on your canola?

Maybe not enough or you are wanting to do more?

With this recent rally I've been looking at different put option strategies depending on how much farms have sold already and what their crop looks like.

All wheat markets have been trading sideways to lower for the last few months.

We finally might be starting to see some bottoming on the charts, but with harvest around the corner the price could fall further.

Below are estimates for Monday's Stats Canada report:

I've mentioned to clients I don't see any signs of a bull market resuming in the wheat market right now.

The only thing we could see some buying interest is if there is adverse weather or other grains (soybeans/corn) rally significantly and wheat gets undervalued.

December corn futures have rallied to the highest level since June 24th.

Talk of the short-term overbought condition of the market with a jump of 11% off of the August 18th low is seen as a negative factor.

It seems we might be seeing some active profit taking.

Possible better yield potential for parts of Illinois and Iowa from the crop tour helped spark selling off of the highs.

However, corn yields in three western Iowa crop-districts are lower from estimates a year ago as per the Pro Farmer Crop Tour.

The USDA earlier this month forecast corn the yield for top producing Iowa at 205/bucare, which if realized would be unchanged from last year.

Recent rallies have been partly triggered by reports of poor yield potential for Nebraska and smaller than expected yield from Indiana.

So far for the crop tour, scouts see South Dakota yield potential down 21.8% from last year.

Funds may continue to push corn higher, but any sharp breaks lower could lead to significant selling.

Some recent weakness in the beef market and the overbought condition of the market may have sparked some selling.

With a sluggish cash market and uncertain seasonal demand, the market still looks vulnerable to correction.

Ideas that Labor Day beef specials have already been priced helped to pressure.

The cattle market remains in an overbought condition and slaughter so far last week was up 7.5% from last year's pace.

Production drops well below year ago levels in the 4th quarter.