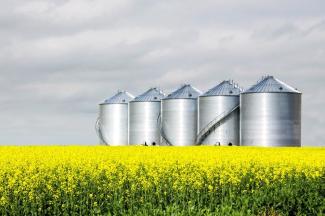 Do you hold CANOLA in the bin?

Do you have canola in the bin you are waiting to sell?

Consider how you can sell your canola at these near contract highs and then replace it using futures or options.

There are still positive factors for canola to reach new highs with how the soy and other vegetables markets are trading.

Plenty of weather uncertainty is driving volatility in soybeans and soy oil, which have recently rallied.

A jump in palm oil and the continued surge in energy prices have added to the bullish tone.

Replacing your physical canola using futures or options takes away guessing if the price is going to keep going higher.

It "locks-in" a very profitable price for your physical canola and still gives you the upside in the market.

Keep in mind you don't have to replace all the physical canola you sold giving you more marketing flexibility.

Increased tensions between Russia and Ukraine has added some risk premium to wheat futures.

The Commitment of Traders report for the week ending January 25th showed managed money traders are still net short wheat, but did cover some of their positions.

Wheat production across major exporters is expected to increase for the new crop season.

Traders see feed-wheat demand on the decline if global corn prices come down.

While old crop world ending stocks are relatively high, when you combine that with U.S. and major exporter stocks they are somewhat high at 51.59 million tonnes.

The Ukraine/Russia tensions and stocks situation might be bullish, but the technical action definitely isn’t showing that.

Minneapolis wheat in particular is nearing the $9/bu level again on the March futures.

Weather forecasts for Argentina and southern Brazil showed just some light scattered rains for next week.

However, the 8-14 days forecast models show higher rain amounts for this region.

Traders expect to see significant damage to the crop in South America due to lack of rain during a key growing period in January.

This damage would not have been reflected in the January USDA supply/demand report.

Brazil firm AgRural lowered their soybean crop estimate down to 128.5 million tons from 133.4 million, which is 10.5 million lower from the USDA in January.

Technical indicators are overbought, but a positive trend remains intact with new March contract highs being made.

If total South American production declines 24 million tonnes from the January USDA forecast, world ending stocks could fall to 71.2 million tonnes, which would be the tightest since the 2013/2-14 season.

We might be seeing March corn run into some significant resistance at $6.40/bu.

The positive trend remains in tact even with the 40 cent/bu rally in two weeks.

Strength in the energy markets is adding to the positive tone.

Further damage to the Argentina or Brazil crop could tighten world ending stocks even more.

Corn open interest is on the rise as index and trend-following fund traders have been active buyers.

China's corn demand is expected to remain strong, as prices there are close to $11/bu compared to $6.25/bu in the U.S.

April live cattle closed sharply higher on the session last Friday and the buying pushed the market up to the highest level since January 20th.

A strong recovery in the stock market plus ideas that packer margins are strong enough to support higher cash markets ahead helped to support.

Cash live cattle trade was light on Friday, but it continued to trend lower from the previous week.

The U.S. cattle herd as of January 1st is seen falling by over 1 million head to 92.5 million, the lowest in six years, according to a Bloomberg survey.

It would be the third year over year decline in a row.

March feeder cattle is trading closer to the bottom end of the range.