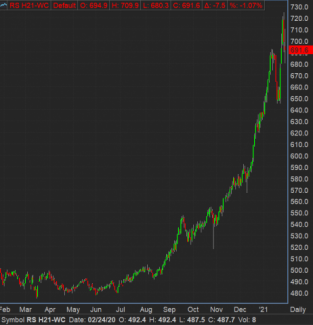 Canola will inevitably decline at some point and not recover from it.

However, I'm not in the business of trying to call a top so if you want that you don't have to read any further.

My role is to help farm operations protect their prices and participate in opportunities when they may be there.

One main factor why canola has increased this high is because of tight stocks and continued strength in how we are exporting.

Canada has exported 5.8 million tonnes of canola through the first 24 weeks of the 2020-21 crop year, according to Canadian Grain Commission data.

That compares with 4.2 million tonnes at the same point the previous year.

The latest supply/demand estimates from Agriculture and Agri-Food Canada peg canola ending stocks for the current marketing year at 1.2 million tonnes, but analysts expect that could dip below a million tonnes if the export pace holds up.

Front month canola futures have clearly led, but the current situation could start to bring up deferred months as well.

Many farms I talk to are going to be increasing their canola acres because of the current prices.

Are you protecting these high prices somehow?

I've been reviewing strategies with clients given where the market is.

What I do for clients is give them the comfort that they know a portion of their new crop is protected. 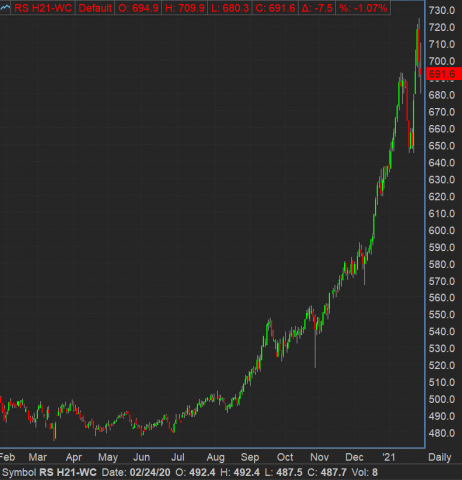 Wheat futures have backed off from the highs made two weeks ago.

Fundamentals for wheat are not as bullish compared to corn and soybeans.

A wet weather outlook for the U.S. Plains in the next few weeks is seen as a possible bearish force.

There has recently been a sharp rally in the U.S. Dollar, which makes it more difficult to export U.S. wheat.

Positive factors have been other grain markets still moving higher.

The surge higher in corn prices remains a key positive influence because as China and others may substitute wheat for corn in feed.

Also, continued talk of less available wheat from key exporters such as Russia, Ukraine and Australia has provided some support to wheat prices.

The Russian government has formally approved a proposal to impose a higher export tax on wheat from March 1st.

Traders believe that U.S. and Canadian wheat exports might get a boost from the Russia tax situation.

Right now trends are positive for wheat and I could see the futures increasing with the other grains for the time being. 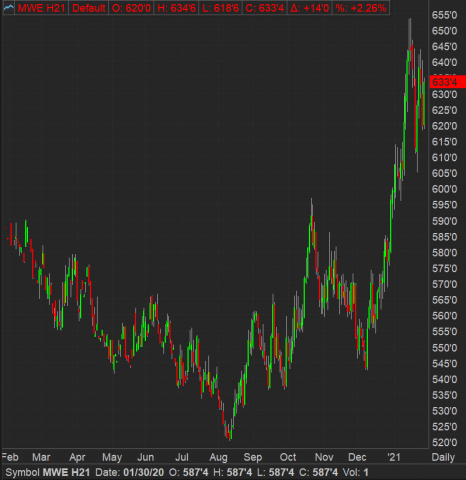 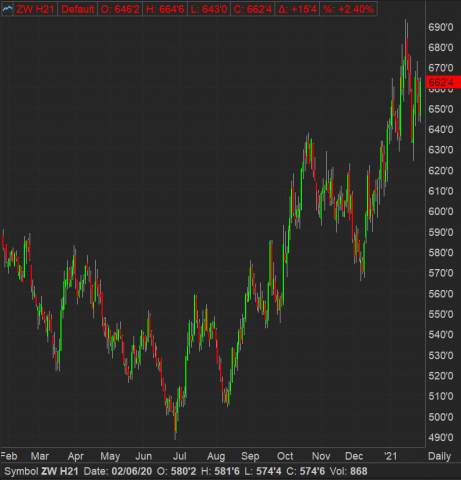 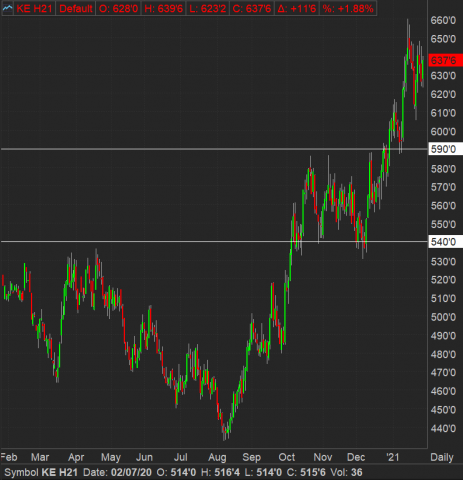 The whole soy complex remains in a steep uptrend, but we can’t rule out a short-term correction at the current levels.

There seems to be decent rains in South America short term leading traders to be a bit less fearful of a major crop hit.

Chinese demand has been drawing down U.S. supplies of soybeans.

I'm currently bullish on soybean futures as funds are relentless on adding to their long positions on pullbacks.

When funds increase their long positions this much it can be dangerous because any little bit of news that isn't supportive could lead to a massive selloff.

At this point I'm not protecting clients new crop by going short the straight futures unless out-of-the-money calls are purchased to protect from a massive upswing.

I'm more comfortable looking at bear put spreads for protection (buying a put and selling a put lower down) rather than buying puts outright because of the cost. 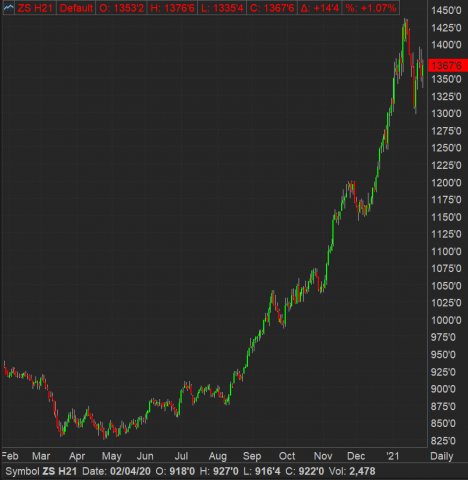 The bull trend continues for corn with another contract high reached last Friday.

This rally last week was led by news of 1.7 million tonnes of U.S. corn sold to China and another 213,600 tonnes to an unknown destination.

The USDA currently has China as an imported of 17.5 million tonnes of corn and at the ADM earnings update officials suggested China may import near 25 million tonnes.

This would add 295 million bushels to the USDA export forecast.

On top of the strong demand from China which could tighten U.S. ending stocks this season, any problem with Brazil's second crop (75% of total production) or any damage to the Argentine crop could add to the bullishness.

For now, it looks like the Brazil crop will be planted late and susceptible to heat and dryness in February. 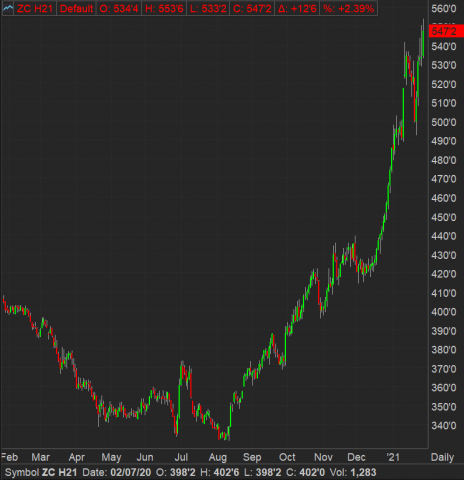 Last week the Bank of Canada had an interest rate announcement and gave an important update on their economic outlook.

The main takeaway is that the BOC sees the economy shrinking in the first quarter as a second COVID wave makes for a choppy recovery.

The benchmark interest rate was left at 0.25% and expects it will stay this way until some point in 2025.

Stimulus remains essential because of the headwinds Canada’s economy has run into.

$4 billion per week of Government of Canada bond purchases is going to continue.

The Canadian Dollar has increased substantially recently compared to other currencies so the BOC flagged that as a key risk to inflation.

Appreciation of the Canadian Dollar creates direct downward pressure on inflation by lowering the prices of imports.

However, further appreciation could slow output growth by reducing the competitiveness of Canadian exports.

If the U.S. Dollar seems to keep declining, the Canadian Dollar going higher.

Recently, the U.S Dollar has started to turn higher adding downward pressure to the Canadian Dollar.

I'm seeing support at 77 cents and resistance at 79.5 cents. 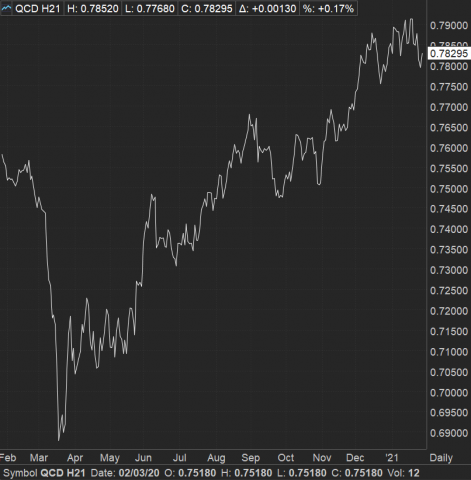 The cattle market is attempting to hold a huge premium to the cash market and it is still uncertain if cash markets trade $3-4 higher on the week futures markets will be able to rally.

This large premium of futures to the cash market is helping to limit producer selling with U.S. steer weights sitting at a record high for this time of the year.

From a technical standpoint, there is no sign of a short-term peak

The continued advance in beef prices is impressive and suggest solid short-term demand for the market.

Biggest question for the market is whether or not the premium of futures to the cash market has already "priced-in" the jump in beef demand as restaurants reopen. 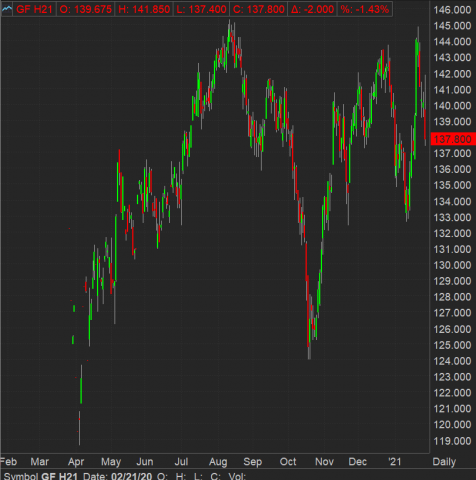 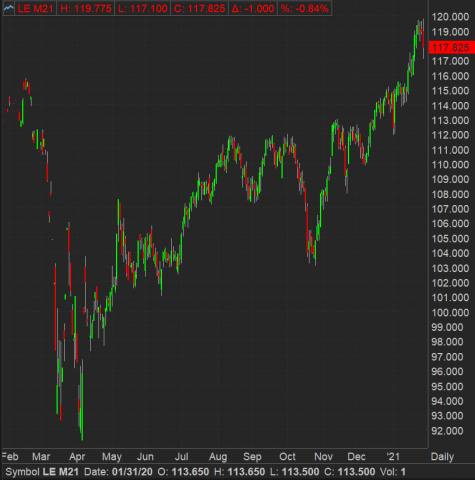