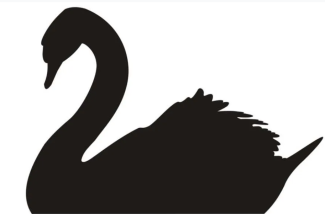 Adam Pukalo | May 5, 2022
Statistics Canada on Tuesday pegged Canada’s 2022 canola plantings at 20.9 million acres, down 7% from last year, 6% below the five-year average and lighter than analyst expectations of 22.1 million.
The USDA predicts our 2021-22 canola ending stocks at just a quarter of recent averages and a nine-year low.
There has been a lot of news lately regarding vegetable oils as global stockpiles are smaller than normal, especially relative to robust demand.
Two 'Black Swan' events have been causing a rally in vegetable oil related products.

A Black Swan is an unpredictable event that is beyond what is normally expected of a situation and has potentially severe consequences.
Black Swan events are characterized by their extreme rarity, severe impact, and the widespread insistence they were obvious in hindsight.

1. Russia’s invasion of Ukraine, the supplier of half the world’s sunflower oil exports, effectively halting shipments. Both sunflower oil and soybean oil each account for 15% of major global vegoil exports.
2. Even more severe was Indonesia’s announcement last week that it would ban palm oil shipments due to sky-high domestic prices. Indonesian palm oil exports account for 35% of all major vegoil exports globally. However, it was revealed Indonesia’s ban covers only some palm oil products, though Jakarta said it would not rule out widening the curbs if prices do not regulate soon.
The situation was already tight for vegetables oils before 2022.
In the last few years, palm oil demand has consistently outpaced production, which has been hampered by weather and labor issues in producers Indonesia and Malaysia.
There are a lot of factors right now to help support canola prices to stay higher.

However, grain markets do get overbought and often need to come back more in-line with the value of other commodities.

For producers that aren't wanting to forward sell, I'm recommending various November options strategies for 10% of their crop. 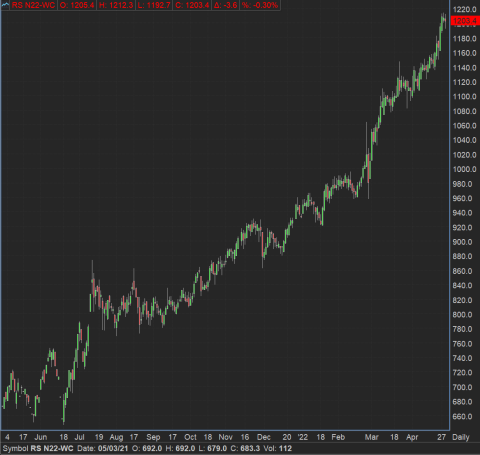 Chart sources from Market Q
Wheat
It seems like all three wheat contracts might have reached their peak for now.

The short term forecast calls for a good rain event in the central and southern plains could spark a short-term correction.

There has been a surge to near 20 year highs for the U.S. dollar plus sluggish export sales news could pressure wheat lower.

Longer term, the wheat market still has plenty of issues.

On April 28th, Minneapolis wheat reached a new contract high of $12.06/bu.
Stats Can reported total wheat area in the country is forecasted to rise by 7.2 percent on the year, to 25.0 million acres.

Of that total, spring wheat area is forecast to increase by 7% to 17.6 million acres, while durum is forecast to be up by 12.5 percent at 6.2 million.

Meanwhile, winter wheat plantings were thought to be down by 13 percent at 1.2 million acres.
“An anticipated increase in area for wheat is likely attributable to strong prices and high worldwide demand,” said Statistics Canada. 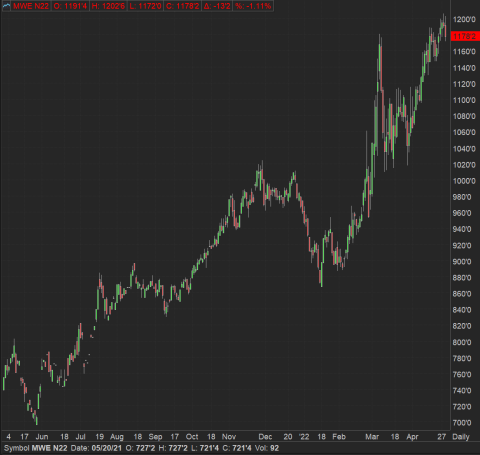 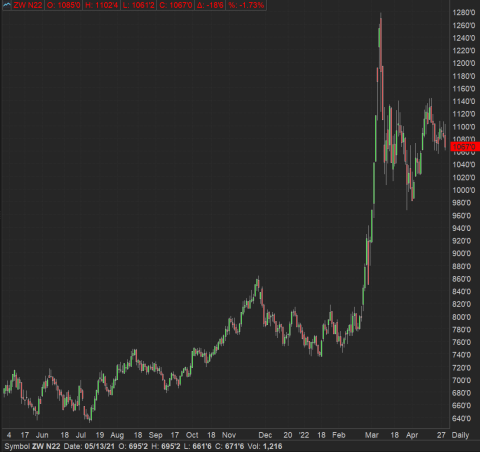 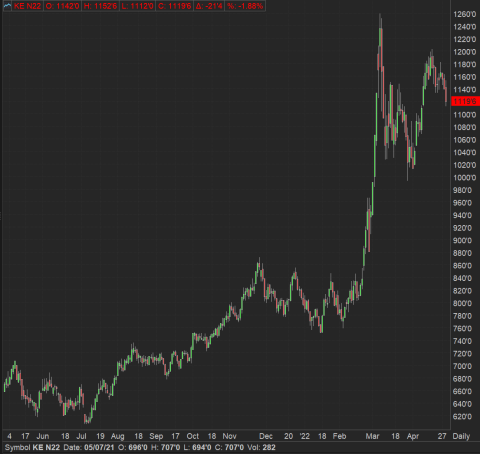 Concerns with the slow planting pace in the U.S. with too much rain in the Dakotas helped provide support.

Near-freezing temperatures could linger in the U.S. Midwest through today, according to the USDA.

The war in Ukraine continues to threaten million of tons of corn supply for the new crop season.

Traders are also concerned about the size of the second crop from Brazil, which had to deal with dry weather for the month of April.

There could be anywhere from 3-8 million tonnes in losses due to lower yield.

Overall, the trend is still higher for corn, but similar to other grains producers may want to look at strategies to protect their new crop. 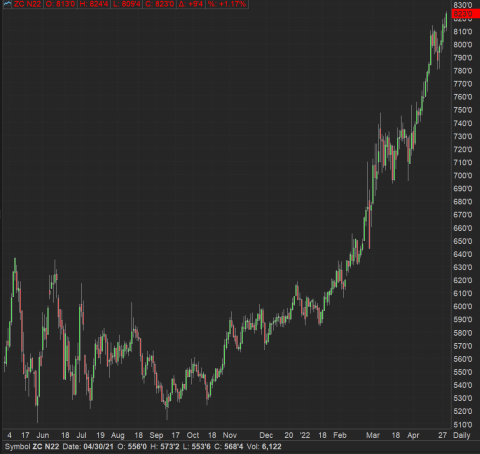 The June Canadian Dollar futures have traded between 80 and 77.5 cents approximately this month.

For the month, the loonie was on track to weaken 1.9% as the war in Ukraine, COVID-19 lockdowns in China and the potential for aggressive interest rate hikes by the Federal Reserve spooked investors worried about the global economic outlook.
Canadian gross domestic product rose by 1.1% in February, beating estimates, Statistics Canada data showed.

March GDP was seen up 0.5% in a flash estimate, with the annualized Q1 GDP likely to be up 5.6%.
Money markets expect the Bank of Canada to hike interest rates by at least half a percentage point at each of the next three meetings to tackle inflation.
The central bank hiked by that increment earlier this month, marking its biggest single increase in 22 years.
Seeing the U.S. dollar surging is the main bearish factor for the Canadian Dollar short term.

Oil prices have been keeping a floor under the Canadian Dollar right now.

I'm seeing 77 cents as support and 80.5 cents as resistance on the June futures. 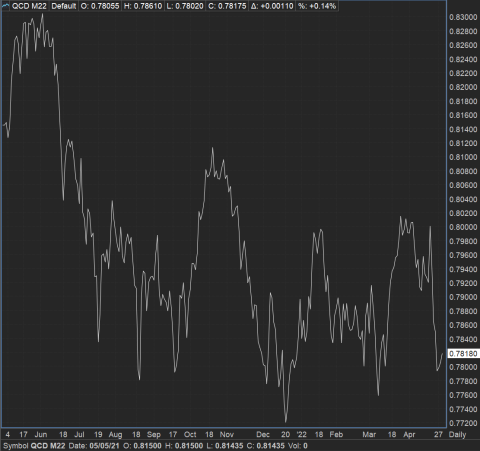 Cattle is down as much as 4.6% off of last Friday's high as weakness in the beef market has helped raise concerns that cash cattle might be lower near term.

U.S. beef export sales for the week ending April 21 came in at 11,400 tonnes compared with the average of the previous four weeks of 17,300 tonnes.

The Cattle on Feed report this month showed cattle and calves on feed for the slaughter market in the U.S. for feedlots with capacity of 1,000 or more head totaled 12.1 million head on April 1, 2022.

This is the highest April 1st inventory since the series began in 1996. 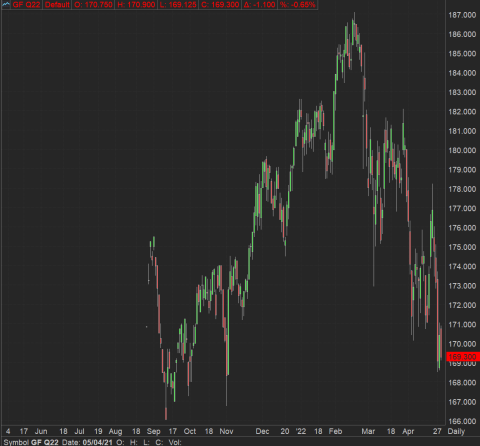 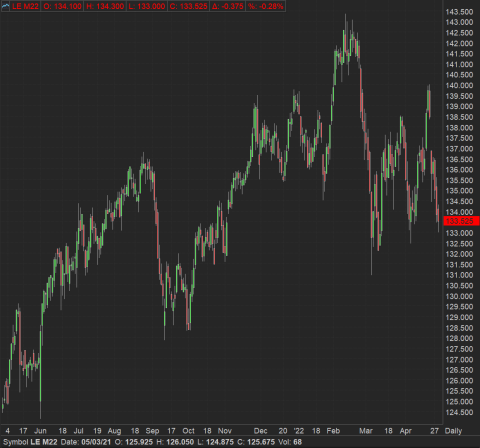