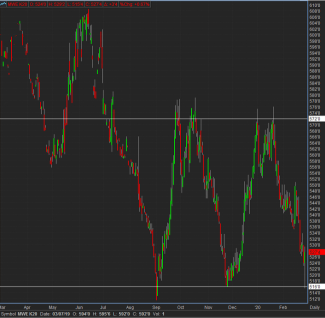 Chicago wheat futures seem the most fragile since the funds are in a long net position, which could lead to profit-taking, or to a market trend reversal. For suitable clients, I've used an options strategy where you sell calls and buy puts to protect from the price going lower.

The calls sold helped pay for the puts that were bought and in the current market environment the strategy has worked out well. Global demand for wheat has remained relatively strong during the cornoavirus outbreak, which was evidenced by Ethopia tendering for 200,000 tonnes of milling wheat.

Minneapolis wheat has quite an interesting chart. It seems like a triple bottom formation could be forming. A triple bottom is generally seen as three roughly equal lows bouncing off support followed by the price action breaching resistance. The support Minneapolis wheat on the May futures has held is $5.16/bu approx. For a triple bottom to take place, the resistance of $5.75/bu approx would have to be broken. This could take some time and there definitely needs to be some more positive news in many areas. However, around this $5.20/bu area could be a good entry point.