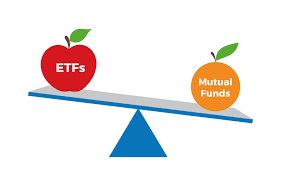 I often hear clients say they think Exchange Traded Trunds (ETF's) are the same thing as Mutual Funds. While there are similarities, there are key difference to know.

To understand the difference, you first need a basic knowledge of them.

A mutual fund at its core is a grouping of stocks, bonds or other investments. Typical mutual funds have 100-200 different investments inside. Often the strategy for mutual funds is to be invested in a very diversified way to reduce risk. Quarterly the company publishes if there were any changes in the fund.  Each investor owns units of the mutual fund, which represents a portion of the funds investments. The company that manages the mutual fund brings together a large group of people and invests their money on their behalf.

According to Morningstar, the average annual management fee (MER) is 2.35%. Investors pay this fee every year regardless of performance and it is deducted from the fund. In addition to the annual fee, when investors purchase a mutual fund they pay one of four types of sales charges to the Advisor buying it for them.....

1. Front end load or initial sales charge (ISC) - A fee charged when the units are bought. This is a percentage (up to 5%) of the amount that you are investing in the fund. This fee is paid to the Advisor that sells you the fund.

2. Back-end load or deferred sales charge (DSC) - A fee charged up to 6% when you sell your units. The longer you hold the fund the less you'll be charged when you sell it. The fee declines every year according to a fixed schedule. Usually, it is around 5-7 years because you can sell without paying a

4. No load - There is no fee to buy or sell the units. You should always compare the MER and performance of each fund as it may not be better than a fund with a fee.

ETF's can hold various investments depending on the strategy such as stocks, bonds commodities etc. They were originally designed to be very low cost and purchase all of the holdings in an index such as the Toronto Stock Exchange, Dow Jones Industrial Average or NASDAQ. There was no manager trying to buy and sell the holdings to outperform. Recently, more ETF's are being formed with managers who have specific strategies still for a low cost.

The ETF's that I buy for clients often have around 20-50 different holdings. Investors can still have a diversified portfolio with ETF's, but can focus in on

According to Morningstar, the average annual management fee (MER) is 0.44%. Investors pay this fee every year regardless of performance and it is deducted from the fund. In addition to the annual MER, depending on the fee structure with your Advisor you may pay a commission to buy or sell or a flat annual percentage of the portfolio.

Summary of the Main Differences